Over time people have been asking me to share the DLA compound I wrote waaay back. So here it is.

The compound can be found in the downloads section.

Diffusion limited aggregation is a natural phenomena in which particles in solution build up over time – as particles are deposited they limit the locations where subsequent particles can be deposited, resulting in a pseudo-random growth of deposits with characteristic nodules and ‘fjords’. You can see examples of DLA systems in nature all over, from veins of copper to urban growth patterns. In this simple ICE implementation particles are emitted from geometry and then pulled towards a “seed” point, namely the point cloud the compound is applied to. If there are no existing points in the cloud the first will be deposited at the origin. This causes DLA structures to build towards the provided surface and then to spread across it or inside it’s volume. The compound has a turbulence node which adds a random tropisim as well as a vector input for user-directed tropisims. Please be aware this was never intended as more than an experiment: it works fine but is a pretty simple implementation.

To use: apply the compound to a point cloud (typically with a single point) in a simulated ice tree… …

A lot of people have been using an ICE compound I made a while back, “Emit instance matched to SRTs.” I made it during a game cinematic project to allow me to animate pre-scored geometry for explosions. 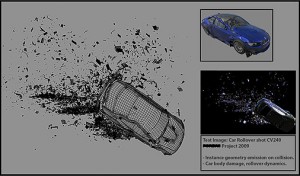 Since I’ve received so much feedback (and not a few questions) I’ve uploaded some basic example scenes illustrating a couple of ways the compound is meant to be used.