While making a demo scene for PopcornFX I found a need to make individual particles move on arcs where I could choose a start and end position, height of the arc, and overall placement in 3d space. Depending on how you approach the problem you can easily find yourself slogging through some pretty involved math, at least for the level I’m at. An “arc” can be a parabola, or a section of a circle or so on. A few directions can take you into the woods pretty quickly. I wanted simple.

The simplest approach I’m aware of is to construct a quadratic bezier curve, since it is defined by a start, end and midpoint and can easily be plotted out using a few LERP functions. If you define a start point, end point and midpoint a quadratic bezier curve describes a very intuitive arc, and if you restrict the control point to be perpendicular to the midpoint of the line between your start and end points you get a beautiful parabolic curve in a very intuitive fashion.

Once I had decided on a quadratic bezier, creating a template in PopcornFX was quick, and it wasn’t long before I had a very useful new node in my toolbox. To extend the idea a little further I decided to take a little extra time and make another node for a cubic bezier curve, which is a logical extension of the same approach.

A cubic bezier curve is defined by a start point and end point like before, only this time those two points each have a separate control point to describe a 3d curve.

The resulting path can now diverge from a single plane but is still simple enough for the results to be intuitive. In cases where a quick spline is needed in PKFX, this template should allow the artist to describe a simple motion without having to import in a curve or animation. It’s made up of a series of LERP functions and while the idea can be extended further to create fourth or fifth order curves actually wiring up so many LERP’s gets crazy. We’ll stop with our two handy new nodes, the quadratic and cubic beziers.

Here’s what the two look like in PopcornFX. The more complex cubic bezier is the top curve, and the bottom is the quadratic curve, with the midpoint restriction mentioned above:

So from there I had a nice tool to create motion paths of as many separate particles as I needed. To celebrate, I made the following simulation. Yes, we are playing a game of thermonuclear war:

There are a myriad of ways in which the above animation could be approached, but by abstracting out the “arc” motions into templates I am able to finish the project in a way that leaves me with tools for further work in the future. And of course these nodes can not only be re-used, they can be shared out with other artists.

A final benefit is a much more simple graph overall, and best of all we’ve avoided relying on simulation. Sure you could fire each particle like a little mortar and let a physics node calculate the motion up to the point where the particle collides back to earth. But that’s computationally wasteful and worse it cedes control of the results to the parameters you give the simulation.

By abstracting out the arcs the way I did, I am able to easily able to set conditions so that every arc starts from a populated region and ends in a populated region. If you watch the animation you will note no arcs start or end in the ocean. (I admit however that I didn’t go so far as to prevent Canada from nuking the USA and vice versa…)

Similarly I have control over the heights of the arcs, their angle respective to the surface of the world, and the range or distance any point is allowed to travel. Simple procedural approaches can yield visual complexity while retaining control and easing the difficulty of projects!

By the way this image is entirely particles.

The “land” and “city” areas are the result of taking some texture maps of the earth from NASA into Houdini and using them to create PKFX-friendly emitter geometry as .FBX polygonal meshes. This lets me quickly spawn particles exactly where I wanted them as well as define start and end positions for arcs in areas already predefined as valid. No dart-throwing approaches where particles are spawned and then accepted or rejected based on texture maps or the like. 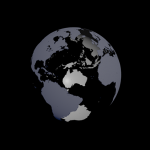 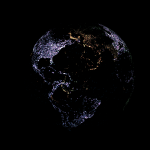 You can’t always predefine information this way but in this case having re-usable meshes defining the landmasses and cities of Earth was another useful set of tools for future projects. Perhaps the next one won’t be quite so apocalyptic…