So, we’ve made a strand circle which rings our original point positions from the simulation, now let’s make those circles align with the rotation of the simulated particle. In practice this is very, very simple. Just insert a “rotate vector” node after you calculate the coordinates on a circle for the strand points, and then use the particle orientation as the input rotation.

Ok, that was nice, but why did it work?

This is one of the simple but critical concepts that is the real purpose for me writing this series of posts, because it’s a foundational way of thinking which lets you come up with solutions to problems every day.

What is a point? It’s a place, within a space. A particle can have all kinds of attributes, like color size and orientation. But a point is just a position, it only has a single value, a vector (x,y,z). In a manner of thinking, a point is a vector. The vector which describes a point is a direction and distance from the origin. It’s a displacement from that point of reference. When you talk about “global” and “local” space you are talking about different frames of reference, different points of origin from which to draw a vector describing points. 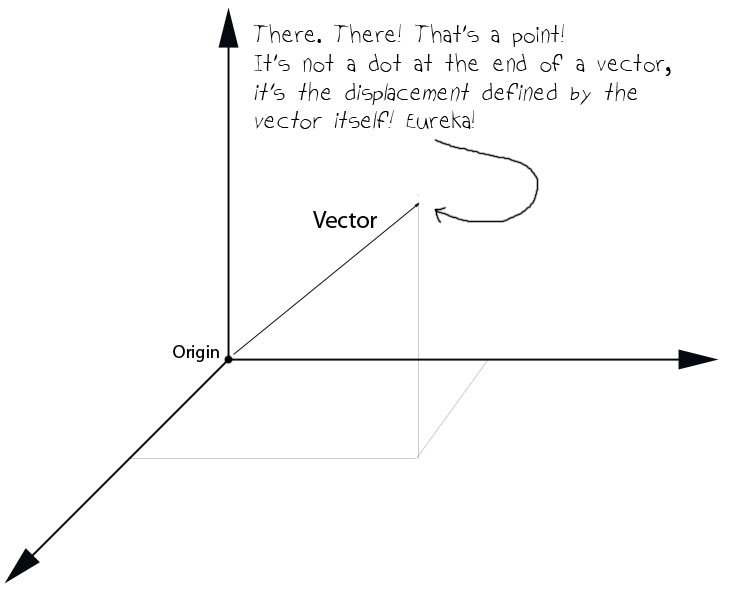 So, what we really did when we calculated an array of strand positions on a circle was make an array of vectors. Hence, rotating those vectors is really the same thing as rotating the strand point positions to match the orientation of our original particle. Points are vectors, they are offsets (or displacements) from an origin. And ICE is very, very good at doing stuff with vectors. You can call these manipulations vector math if you want, but that in itself doesn’t make it beyond your average artist, who like ICE are also very, very good at manipulating points. If you are an artist you already have an intuitive grasp of vectors! You just need to define some terms, so that saying stuff like “rotate a vector” translates to the visual adjustments you do in your head day in and day out.

Seeing stars… and why modulo is so handy:

Ok, cool. We have a bunch of strand rings centered and oriented where our simulated particles were. Let’s make the rings star shapes, as a way of talking about another useful technique in ICE (it’s useful all over in fact), making patterns via the modulo function.

Ok, a digression first – some housekeeping. By now you’ve realized this isn’t one of those step-by-step makes-a-scene tutorial, I’m discussing more and glossing over a lot of the details you may need to actually plug all this together. I really should have provided a sample scene earlier, I don’t want you focusing on plugging nodes together, the whole point of this is the underlying ideas. So here you go. A sample scene with nifty comments and stuff. If all you want is a scene that will make circles and stars, there you go. And it was made with an educational license, even. But if you want the ideas used so you can make all kinds of other stuff, well then dear reader, read on.

The modulo function is just an instruction to divide two numbers and pick out the decimal remainder of that division. If you feed a linear sequence of numbers (like the index of an array: 0,1,2,3… call any of these numbers “n”) into the modulo function, you get a value counting up between 0 and 1. You can use this to identify every “n’th” item in your list. In fact if you crack open ICE’s “every n’th particle compound etc you will basically see exactly this.) If you can do things every “n’th” time, you can make patterns. Think about it. Braiding hair, knitting, drawing a dotted line – making almost any pattern involves counting and every “n’th” count doing something differently. Modulo is how you do that kind of thing in ICE (and elsewhere. Hey, realflow has an ICE like system now. And it works in scripting too. This math stuff pops up everywhere. The big secret is this – it’s just a way of looking at things you probably already do really well.

I’m a visual thinker so when I was first learning about modulo I had to scribble on a napkin, with results something like this: 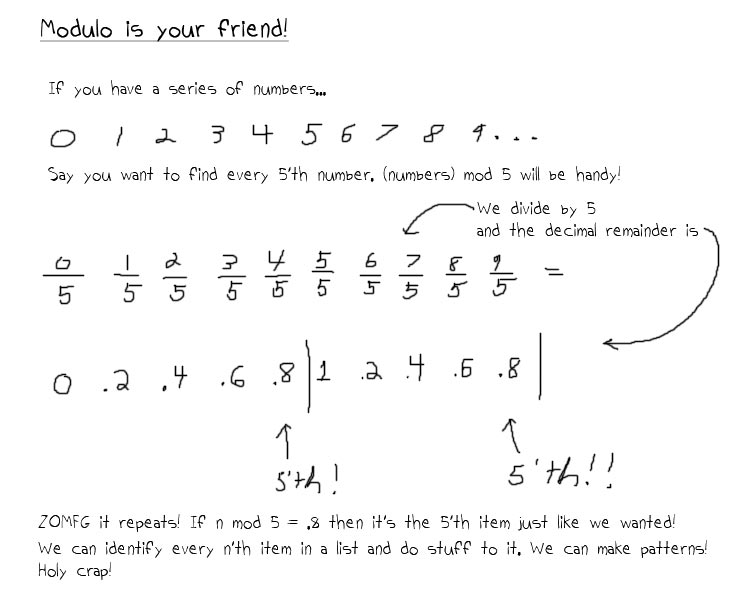 All a star shape is, is a pattern where we take every other point on our circle and change it’s radius. Now we know how to find every other point from our list (the array) of strand positions, so we just change the radius of the formula we used to make the circle for those points. And you get a star. 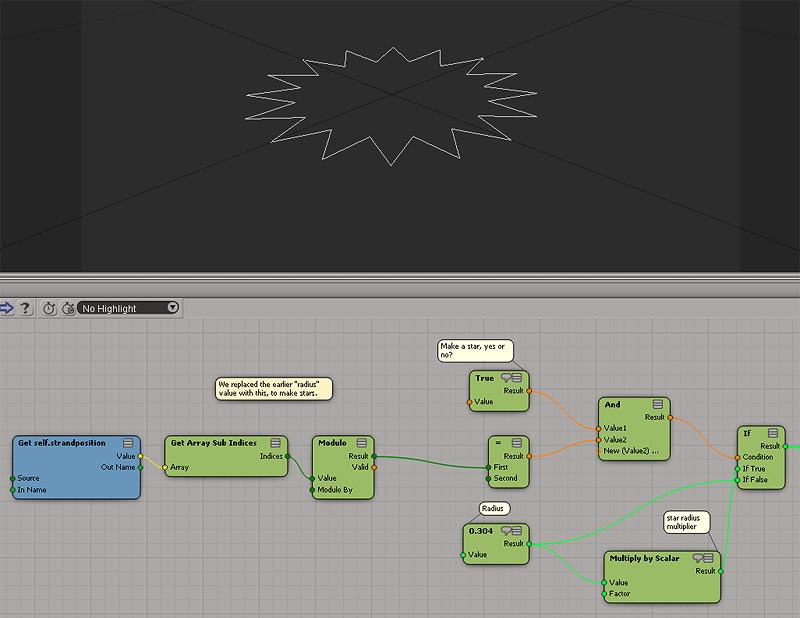 Ok, so just one last part to this tutorial, and a brief one – how to take the single circles we made and, using the earth-shaking power of ICE and the post-simulation region, turn that result into a lot of circles: all different and making little atom things like we see in the example video. And in fact, the example scene here already shows you how, so we’re not even going to do much besides discuss it and crack bad jokes. Cheers. – AM